Doors are everywhere. Some are welcoming … open and inviting. Some portray histories … of pain and suffering.  Some are imposing … and unwelcoming.  Some are ancient. Some are new

Not surprisingly, doors that are opened can lead to self-discovery
… not always easy … not always welcome, but hopefully, in time, healing, hope, awareness of the holy, personal growth emerge

I opened a door recently. An elderly woman heaved a deep sigh as she looked at the display in the grocery store and said “I want to make curry chicken for my husband tonight.”  Something about her demeanour encouraged me to open a door rather than rush off and finish my grocery shopping.  Before I knew it, standing in an aisle in the grocery store
she was telling me that it seemed as if her life had been nothing but death
… her husband had died five years ago on Christmas Eve … her son had died three months earlier … her last sibling had died in the summer

She said she was angry and upset.  She knew she was taking it out on others and also knew that there was no point buying the chicken or making curry chicken that night because her husband wasn’t alive anymore.  She hurt and no one listened or understood until that moment.

When I opened the door to spontaneity asked if I might make a suggestion
she nodded in agreement and as I spoke about grief counselling … she’d not heard of it … tears began to flow. She gave me a gentle hug and whispered
… “I’ll follow-up”  Wiping away her tears,  she smiled, and I was blessed in a very profound way.  All it took was the opening of a door 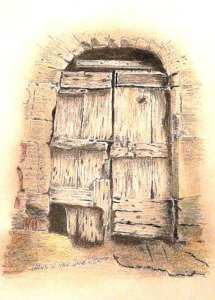